Birds, listing and being grateful

We are at it again folks; making plans to go out. This it’s for Saturday and we are planning to take Kile out for a day’s birding and photo taking. We’ve settle on the London Wetland Centre and then to Richmond Park for the deer. We shall get our 2015 year list off to a decent start from the day. Actually, we will start it tomorrow with the birds out in the garden. One of the Yahoo groups I subscribe to was doing well on posting of bird reports but it tailed off later in the year. The admin is appealing for more support in 2015. I can’t grumble since I hardly posted anything last year at all.

This listing game that we birders play, can get out of hand if we’re not careful. We only keep a life and year list; that’s a yearly list of what we see and what we have seen since we began birding a long time ago. Another list is a ‘patch’ list; that’s a list of a small area around where you live. I don’t bother with that one unless you count our garden birds, which in itself can become a list all of its own.

However, I have met birders who go on to make lists of all kinds. One guy I met was keeps a county list. I met him when he came to see the cattle egret Dorktown was graced with one. The reason? He hadn’t seen one in Warwickshire before; then he was off to somewhere in Staffordshire for a med gull, for the same reason.

Other lists I’ve heard about our birds seen on telly, sub-divided into fictional and wildlife. Birds on cinema films. I wouldn’t spend that much dosh to go to movies to look for birds! Then of course there is all the content on the internet, Birdforum, and that Yahoo group are the two I read regularly.

So from this little ‘list’ perhaps you can see just out of hand the whole thing can get. For me though, the birding is only part of the fun. The main thing for me is being out and about with Jan, and sometimes with Kile, in the fresh air. The photo opps is just as big a draw as the birds themselves. I suppose my biggest regret is that I can’t walk so well and no way near as far as I would wish. We miss a lot of photos because of that.

Here’s another bird photo for you … 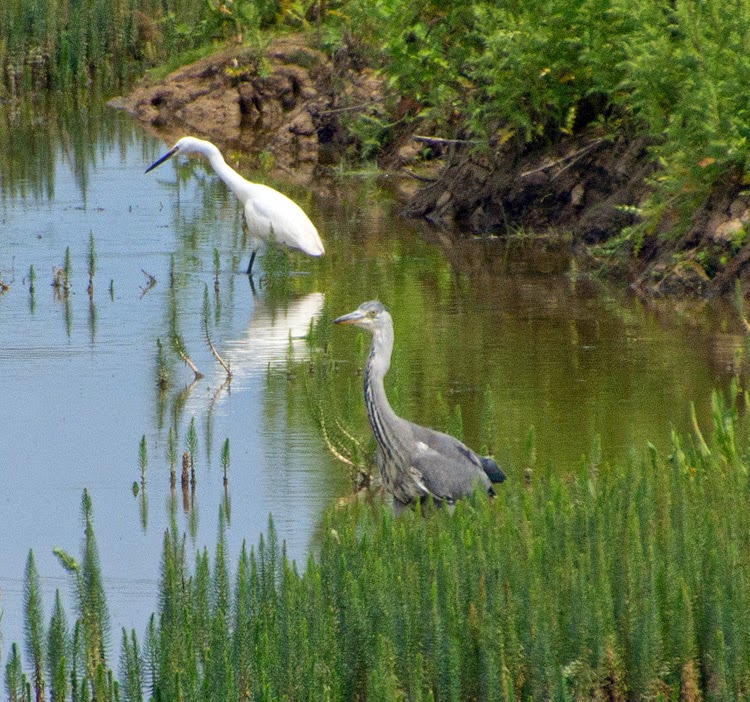 A grey heron and a little egret in the same shot at Slimbridge.

“Oh no! not leftovers again!” complained my older sister when she saw the leftover meatloaf on the table from last nights supper. “Young lady” responded my father sternly, “do you know how many people would love to have a delicious supper like this?! You should be ashamed of yourself! Now before we start eating I want to hear you say grace thanking the Lord for this delicious meal!” “Thank you Lord for this delicious supper”, muttered my sister submissively “….again!”
Posted by BirderRon at 03:59 No comments:

It's keeps hanging on, a productive day and a bridng dream for next year

I was hoping to go out this afternoon seeing as I was feeling a lot better when I got up. Opps … shouldn’t have spoken to too soon. Right not I’m feeling as bad as I was last week when this thing first hit me full on. I could really do with a break from this now. At least you won’t get this virus on your computer.

At least I had a productive day on the ‘puter yesterday. Some time ago, when we lived in Bracebridge Street we had a break in and all the usual items were nicked. Two of them were spare hard drives for our computers. Contents insurance is one thing we are really intent in keeping up, which is a good job really. They paid out without and problems and two new hard drives arrived. For some reason my lappy wouldn’t accept it so I put it away and forget about it. But now I using an Asus desk top so I decided to try it, and it works fine. Productive task 1 then. Now I can start to scan all my photo prints and store them on there.

Yesterday I mentioned that I wrote 1,000 words for my Bristol Fashion novel. Well, I got stuck in again yesterday and got another 1,200 words done. That is only around half of the NANO requirement done, but it is slowly moving forward. As it stands I can see this one being a lot long than the 50,000 NANO effort. I’ve planted a few red herrings within this one and they even keep catching me out. It’s those damned men Black and Harris; they just won’t behave and do as they’re told to! Task 2 …

Birding. We start the New Year off with a fresh year list by going off somewhere on either the 1st or 2nd of January. What I really like to do is to start off at Minsmere, stopover in Great Yarmouth for a night and slowly make our way around the coast to Cley and then Titchwell. What would make even nicer would another overnight stay in Hunstanton and then call in to Rutland Water on the way home on the third day. Sadly we can’t afford to do that this year. But it’s something to look forward to for next year I think.

A bird photo for today I think … 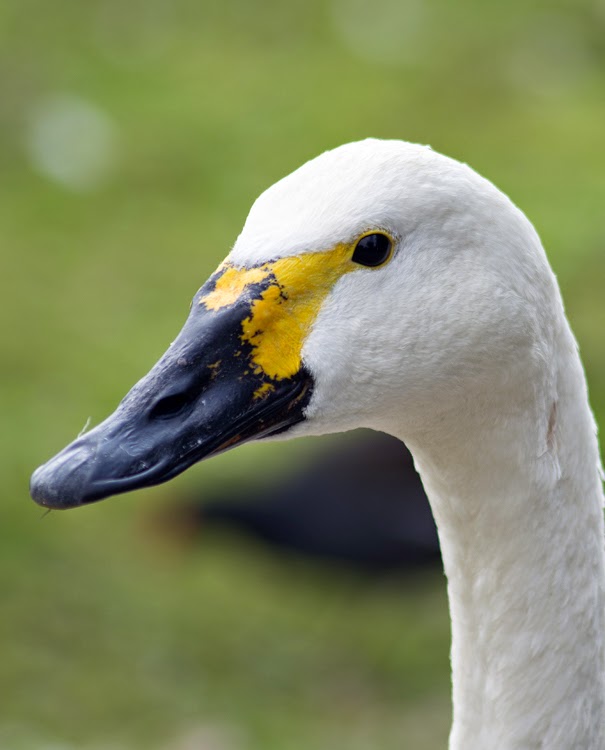 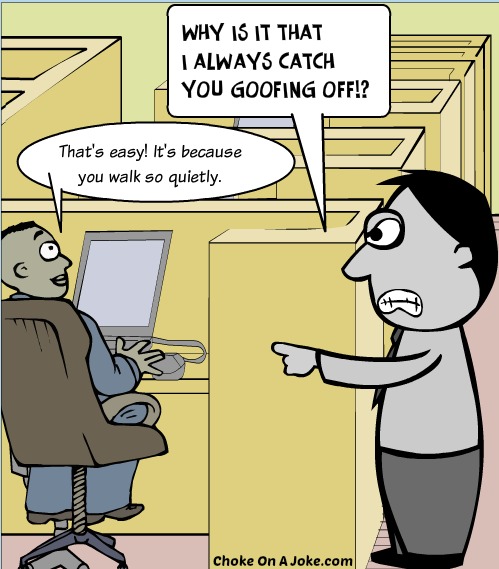 Posted by BirderRon at 06:11 No comments:

Not planning for next year, harmless nonsense and our dogs are everything to us.

So then, it’s nearly 2015; time for making promises to yourself for what the New Year will bring for you. I’ve never bother with making resolutions simple because I know full well that I won’t stick to them. Take 2013 for example; I expressed the wish to spend more time out birding and taking photos in 2014. Well, this year I did go birding and I did take photos, but the numbers have remained around the same as the year before. See what I mean? So for me 2015 will be just like all the other years, but without the wishing for more of what I would hope for. I shall take the years as it comes and live for each as it comes.

Bedknobs and Broomsticks has just finished on telly and I broke off so I could watch it. I’ve seen it loads of times but even so, it’s a good bit of fun and nonsense to while away a couple hours. Jan has decided that it’s a keeper on our Virgin box too.

Shaun, one of my FB friends, said yesterday that he was going get some writing done. I commented that it was a ‘novel idea’ and I got some done too. But before I did there was some tidying up to do first. I actually felt a touch ashamed that I had made so many silly mistakes in a three paragraph section, it really was that poorly written. Once that was sorted I then got another 1,000 words done as well. Feeling rather pleased about that now.

This head cold thingy I’ve had will make up its mind if it clearing up or not. First thing this morning I felt really good. Then I got very cold and shaky and sweaty.
Then I got warm again; now I’m getting cold again. At least I’m not feverish as I was last week. I’m hoping it will be clear for tomorrow so I can go and do some shopping with Jan. It will be the first time I have been out of the flat for over a week if I can get out. Here’s hoping folks ….

I really do like the writer Peter James and I read as much of his work as I can get my hand on. He has a FB page here … https://www.facebook.com/peterjames.roygrace?fref=ts  Of course I am one of his many followers. Peter has reported today that his dog had died after living with him and his family for 12 years. It’s always a sad day when that happens. So many will know just how he feels. For today’s photo then … 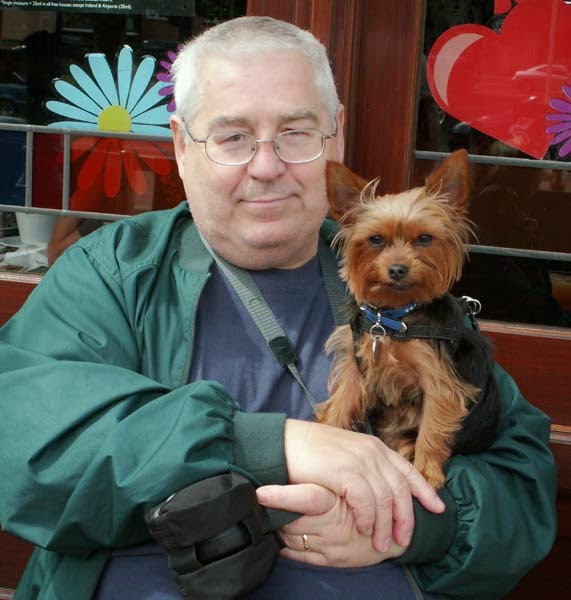 Me, with Cindy-pup in her favourite place. We lost her not long before she was four years old.

Posted by BirderRon at 08:30 No comments: