Well, we're in!  Our hotel is great and we're sat together in the bar having a drink before bed time.  The trip up was OK and the only hold ups was yet again due to the matrix signs being on when they didn't need to be.  Even that was hardly enough to hold us up though.
Blackpool is pretty much as normal, cold and dreary.  We used our scooters to have a ride along the prom but it was so cold we just couldn't stay out any longer.  At least its dry, so that's a blessing.  Tomorrow we're off to Leighton Moss RSPB site to do some birding.  That should be fun.  I can then make a new posting to my other blog, the first in two months ;-)))
That's enough for now, I'm knackered and I'm off for an early night.
Posted by BirderRon at 12:49 No comments:

29 August 2011
One of my many medical conditions is hay fever, well, sort of.  With me it's an all year round thing not just a spring/summer thing.  The wind can also cause me problems too.  So when we handed over Bella and Rusty to their new owners in Newark it was the wind making my eyes run, not handing over our beloved dogs!  Now we sit here and it's so quiet.  No yapping when everything goes past the house; no running around having a mad half hour; no jumping up wanting a fuss and love ... I MISS ME DOGS ;-(((
Yes, I do miss them but we just can't look after them properly now.  If we had know how our health would have worsened over the last 12 months we wouldn't have got them.  We know that they have gone to a good home now and will be well looked after - but guilt is still there.
We have now booked ourselves into the Fairways Hotel in Blackpool.  I stayed there before about 2 years ago and it's a great little place.  Anyway, we arrive tomorrow after lunch and we will be there until Saturday morning.  We'll be doing some birding while were up there as well as looking at a couple of properties for when we are ready to leave Dorktown.  I shall also be doing a lot of people watching too - who knows, I might get an idea or two for some stories.  I'll also be doing a bit of research on birding sites for Assignment 1 of the Creative writing course too.
Our baked jacket spuds are in the oven, all the packing is done, now we are just sitting relaxing and playing on our 'puters.  It's such a hard life ... ... ... ... ... ... ...
Oh yes ... lots of photos to come soon!
Posted by BirderRon at 09:42 No comments:

28 August 2011
There I was lay in bed reading Writer's Forum when in one article the writer mentioned that he had been envious of another one because of the time they had to write so much.  That reminded me of when an old friend Ron Barton had told me he was envious of me because I had the time to sit and read and study the Bible as much as I did.  This was when I was an active member of the local Baptist Church here in Dorktown.  It was also during the time of Mad Maggie and I was also one of the millions who were unemployed and couldn't find a job anywhere.  Anyway ...
There I was down in the dumps over yet another fruitless day of search for a job and Ron came out with his comment after I told him what I had been doing all day.  That was the first time anyone had told me that they envied me for anything.  I was rather shocked by it to be honest.  I was always envious of Ron and his job at Massey Ferguson, they tractor manufacturer.  Eventually I came to see his comment as a postive in that it taught me that even when we seem to have a lot of time on our hands, we can always turn that time to some good in some way.  So thanks Ron, you did me a favour that day.
Sadly Ron won't read this seeing as he died some time ago.  So here's lesson number two for today, if you owe a 'thank you', do it now, not when it's too late to do any good!
Here in Dorktown we have cloudy and sunny patches right now.  Jan is ready to go off to church again and I shall start packing ready for a few days away to Blackpool starting Tuesday.  Tomorrow the kids go off to Mapplethorpe.  Well, we'll take them to Newark and then their new owners will take them from there.  We feel a bit ambiguous about it though.  We'll be pleased they are gone because we can't look after them properly now but we will also miss them and will feel guilty about them being given up.  Deep down we know we are the best for them and for us, but the guilt is still there.
Posted by BirderRon at 02:25 No comments:

27 August 2011
I love ART.  By art I mean visual art; paintings,  statues, architecture and the like.  I like music too but dance is pretentious nonsense to me.  Literature is OK  then, with this in mind, did any of you see the Andrew Graham-Dixon show on telly during the week called Art of Russia?  it was good and you can still catch it on BBC iplayer if you're quick.
He interviewed one Russian guy who it was claimed owned the largest collection of Russian Icons in private hands.  Towards the end of the interview Graham-Dixon likened some of the paintings to sum American works.  The Russian was really upset by it and he got a bit angry.  He said something like, "Who is America?  They own nothing and borrow everything.  Even their language is borrowed and not their own!"  That comment got me thinking.
He is right you know.  Not only do they borrow just about everything they butcher it to their own uses and then forget they borrowed it in the first place.  Look what they have done to English for a start!  Now they claim its American if challenged.  They don't do the same with any other language do they?
Sir Frank Whittle invented the jet engine - yet the yanks pay little respect to him for that.  And what about Alexander Fleming and penicillin?  How much credit do they give for that little earner?  They claim to have built the first atomic bomb, well, yes they did but they worked on the inventions and discoveries of other to do so.  Even their much trumpeted rockets were built on Germany ideas and inventions.  And don't forget that the first computers were made here in the UK, not in Yankydoddledandyland!  Even the World Wide Web was invented by a Brit!
Maybe the place should be renamed to the UBS - the United Borrowing States ;-)))
Anyway, enough of that!  We took Kile to Brum last Saturday as I said we would.  He wasn't at all spoilt rotten while we were there, honest!  He's old to enough to have his own watch now, so he got one.  He saw some radio controlled cars that he liked - he got one.  And last of all he got a large water canon thing he liked the look of - he got one.  Well, it's not often we have him so why not.  Oh yes, we did actually buy something for us too.  We bought some long stripes of plasters that we like and Jan bought herself a new over shoulder bag - she goes through them like I go through pints of real ale.  Speaking of which ...
The baddie in my first book The Mission drinks real ale too.  At around 10.20 last night I finally got the last of the proofreading done and later today I will get it sent off to CreateSpace for the last Proof copy and then I can release it into the wild.  Getting really excited now.
Here's some photos of Kile form last weekend ... 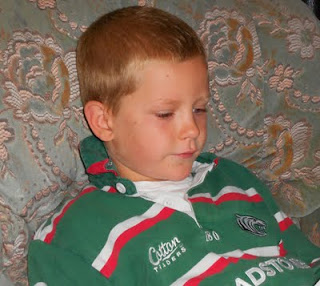 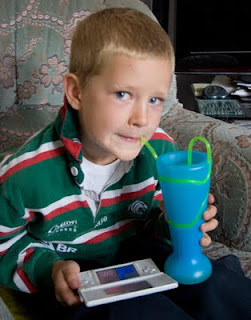 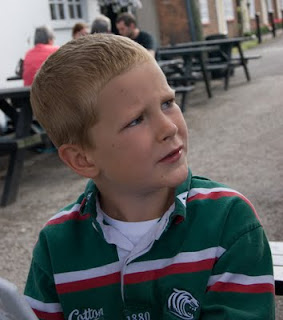 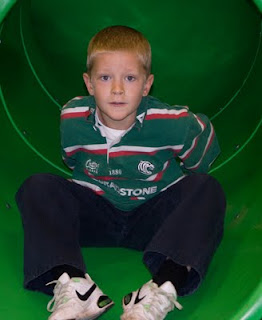 Posted by BirderRon at 03:28 No comments: