Hmm; my W10 browser Edge has decided it doesn’t want to play anymore. It actually happened on Thursday and I have no idea why. I had been in a live chat to cancel my £90 subscription to MacAfee internet security, simply because I think ninety quid is far too much. After saving the chat and copying it to a Word doc too, I clicked out of it and opps, Edge won’t now work. I do have Firefox which is still working so I’m not being held up any now, but actually, I quite like Edge. Ah well …

MS Office did an update just before Christmas and it now includes suggests for reducing word counts. It’s bugging the life out of me, come on, Yanks telling me what I should write; not on folks, not on at all! Having said that, some of the suggestions do actually make sense, but most are just being pedantic, so I ignore them. One word it always picks up the word ‘actually’, as it the sentence before this one. What the software suggests is not what I want, so I ignore it. It’s just that it’s a pain in the rear end whenever it happens.

We writers are urged not over-write stories. There’s a ban on words like ‘very’, at least you would think so the way some folks go on. One wise(?) person said, ‘If you see and adjective, cut it out!’ Oh really? An American writer/tutor has a hate on the word ‘replied’ and gets shirty if he sees it in any submitted work. Some of these people need to get a lot more methinks! Anyway, I get the impression that this latest Word update is about these ‘rules’, but I’ve never really been one for obeying the rules at the best of times. This one I shall continue to ignore.

It does make me wonder though where these rules come from, who thinks them up. The why question is easy, they need fill their rice bowls. These hated words are there to be used, so why not use them? What is the point of having certain words unless you do use them? OK, I can some point to some of the rules, but I don’t see so many make a big fuss over them. Nope, I shall continue to use whatever is there to be used. Besides, I’ve seen big name writers who ignore those same rules; is that case of ‘do as I say not as I do’? If so, then perhaps I need to find some new writers to follow.

It has been so long since I did any work on Arathusia that I had where I had got to with it. The hand written first draft is standing at 151 A4 sheets; the typed up version 78 pages. Part of my problem with it was that I had difficulty in finding where typed story ended so that I could continue on without doubling up. Yesterday I spent some time looking for and finding where the story had got to. I was also missing some of my ‘prompt’ sheets I use. They cam to light the other day and that helped. So there I was, sat here, fountain pen filled, paper in front of me and heard the dreaded words … ‘Are going to some telly love?’ I managed to write 35 words, just 35! Hopefully I shall get more done soon.

I am also aware that … and Bristol Fashion ended a lot looser than I would have liked. Me old mate Bill Howe is proofing for me, and will make the changes he suggests. Bill is good and I trust him in what he says. Once that is done I shall then see where I tightened it up, and maybe even round it off a lot better than it is right now. It’s either or writing a third book to the series, something I hadn’t planned on. I’m not so sure the story line is strong enough for a third instalment though. We shall see in the fullness of time.

I shall be pleased to get out and get some new photos this year. As it stands I haven’t lifted my camera to eye level for some time now. That means that today’s photo is another for my old folders … 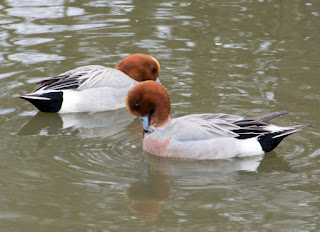 A couple of wigeon.

While walking along the sidewalk in front of his church, our minister heard the intoning of a prayer that nearly made his collar wilt. Apparently, his five-year-old son and his playmates had found a dead robin. Feeling that proper burial should be performed, they had secured a small box and cotton batting, then dug a hole and made ready for the disposal of the deceased. The minister's son was chosen to say the appropriate prayers and with sonorous dignity intoned his version of what he thought his father always said: "Glory be unto the Faaaather. .and unto the Sonnn ... and into the hole he gooooes."
Posted by BirderRon at 03:23