Yesterday morning I sat here staring at a blank screen and after twenty minutes I decided to see what funny to post, perhaps something else would pop into me ‘ed while I was at it. The result is that today’s funny is actually yesterday’s funny – and I still had a blank screen to star at. Normally I don’t have a lot of time for so-called writer’s block; I normally call it procrastination, or lack of discipline. After yesterday I might have a little more sympathy over the issue; we’ll see … … …

An ex-Royal Marine is creating a stir on his housing estate by ticketing cars who are parking outside his house to save paying the illness tax of parking in the nearby hospital car park. I have some sympathy with him really, but only up to a point. None of us have a legal right to park outside our own house, and that is the issue here, or is it? The head-line that attracted me to the story claimed the man objected to the poorly parking of the cars, not that they were there in the first place. Drivers who get the ticket are complaining, home owners are complaining because the drivers are angry at them. We have a similar situation outside here too, again, it’s down to drivers parking selfishly. By that I mean taking up two spaces, which means no-one else can get in.

There’s not that many complaints about it these days though, we’ve given up on it. The issue that still annoys me though is the non-disabled parking in spaces for blue badge holders. Most of the supermarkets are refusing to police the issue, certainly we have been told by Tesco they won’t do so. Perhaps it’s the aggression of so many people these days when their wrong-doing is point out to them that pushes Tesco down this path. There’s a strong market for stolen blue badges too because of the cost of parking in so many places these days. I suppose it could be argued that it’s yet another victimless crime and therefore not serious. However, by illegally using a blue badge deprives a genuine person of a much needed parking place, and that does leave a victim.

Mobile phone use is another issue where people don’t like being picked up for it. We hear cries of, ‘It’s hardly the crime of century is it?’ They should go and tell the families of those killed when they are hit in this so-called minor, or non-offence. Do you watch the reality-cop shows on telly? If so, have you noticed the number of single maned cars where they have to drive and use their radios at the same time? See, makes a mockery of it doesn’t it?

How many drivers have you seen smoking while driving? There’s not as many these days but there still a good few of them. Think about it a sec; they reach for the pack, flick it open, take one out, return the pack, pick up the matches or lighter, so far not too bad you might think, but what about lighting the damned ciggy. I’ve seen then using both hands to do so, steering with their elbows as the do so. Isn’t it time this one was tackled be now? Ahhhh … but there’s a need to raise dosh from taxes paid and that might fall by cracking down just one small minority of people.

Oh yes, we’ve heard of guys being stopped while watching a DVD and driving, of women being stopped as they apply their makeup, and another guy eating pasta as he drove. There’s even a case of woman getting a ticket for drinking water while stationary at a red traffic light (which did seem a tad silly on the cops part with that one). So yes, there’s lots of distractions out there on the roads these days, and there will be one that will be right up your street that you may end up getting a ticket for at some time. What it need is for all of us to be careful while we drive, simple as that. 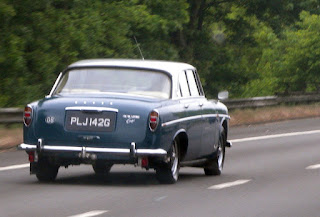 One of my distractions, classic cars, Jan was driving though.

A little boy came home eating a big candy bar. His mother (remembering he had already spent all his allowance) asked him where he got it.
"I bought it at the store with the dollar you gave me," he said.
"But that dollar was for Sunday School," his mother replied.
"I know, Mom," he said, "but the Pastor met me at the door and got me in for free!"
Posted by BirderRon at 03:42